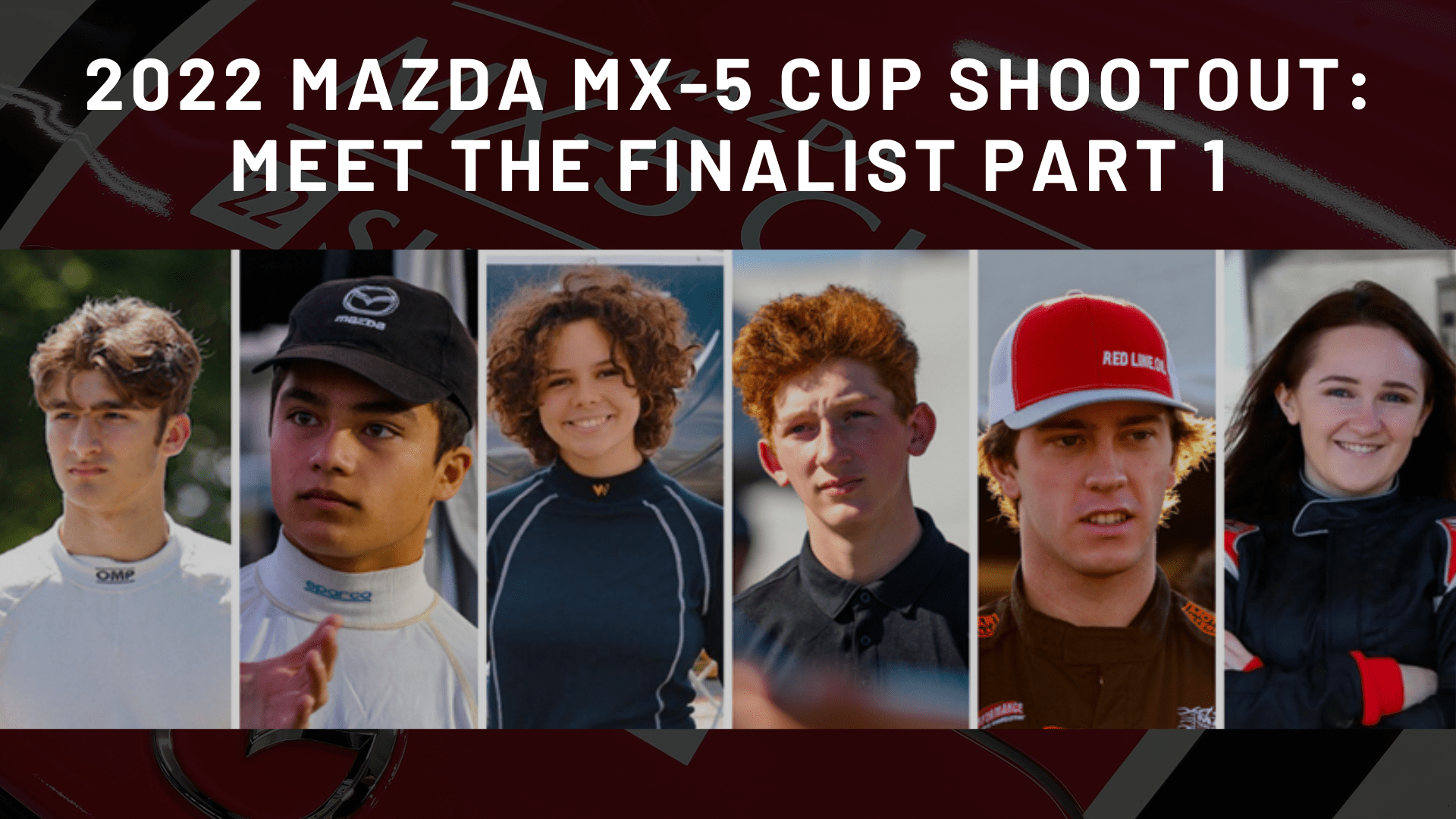 The 15th edition of the Mazda MX-5 Cup Shootout is a week away and the 12 diverse finalists are counting down the days to their shot at a scholarship valued at $110,000 from Mazda to compete in the 2023 MX-5 Cup season. Here’s a brief introduction to six of those candidates.

Thomas Annunziata (Colts Neck, New Jersey)
Thomas Annunziata is one of two drivers who have actually participated in a Mazda MX-5 Cup race. Last August, he took part in Rounds 11 and 12 at Virginia International Raceway, finishing 11th and ninth. Annunziata comes into the shootout as the latest Spec MX-5 Series and National Champion.

“I started racing cars only a year ago,” Annunziata said. “I started in Spec Miata. I was a finalist for the Spec MX-5 Shootout last year. I did not win that, but the goal was to win both championships in Spec MX-5 this year and the MX-5 Cup Shootout.”

Alex Berg (Buford, Georgia)
The other finalist with MX-5 Cup race experience is Alex Berg, who took part in the 2021 season finale at Michelin Raceway Road Atlanta, finishing 16th and 13th. Berg won the Spec MX-5 South Region Championship and finished third in the Series Championship. This will be his third-straight shootout appearance, having taken part in the 2021 Spec MX-5 Shootout and last year’s MX-5 Cup Shootout.

“I’m a very emotional driver,” Berg said. “Something the judges told me was to not let my emotions get to me. That’s something that I haven’t perfected, but I really, really worked my hardest on. I’ve been doing a lot of mental training. Other than that, I’ve been told I check all the boxes in terms of pace and off-track abilities.”

Laurin Brallier (Clements, North Carolina)
An at-large nominee, Laurin Brallier has spent the last two years racing Formula Vee in SCCA. Seeing the opportunities offered by Mazda, Brallier started racing in Spec Miata this June. Her experience in karts and Formula Vee gave her an excellent background in the “momentum conservation” style of racing, but she knows she still has a lot to learn.

“The cars are complete opposite of each other,” Brallier said. “I’ve been learning a new driving style, because the Formula Vee has very low grip, the tire contact patch is so small, so you’re kind of babying the car the whole time on entry, mid-corner and exit. The Miatas, you just kind of chuck them and they roll! I’ve been learning that and trying to maximize my speed.”

Nate Cicero (Pound Ridge, NY)
Making the step from the Spec MX-5 Shootout last year to the MX-5 Cup Shootout this year is Nate Cicero. His prior shootout experience combined with his recent run in an MX-5 Cup car in the World Racing League finale at Sebring will make him a formidable opponent.

“It’s nice to see a lot of people chosen from Spec MX-5, especially because it was extremely competitive this year,” Cicero said. “I think it’s a good ladder system. Using the older generation Cup cars is a good platform to learn how to race.”

Wyatt Couch (El Dorado Hills, California)
Back for his second MX-5 Cup Shootout is Wyatt Couch who has a whole new perspective on the sport after starting his own Spec Miata/Spec MX-5 team this year. Couch has been especially busy balancing his racing life with his mechanical engineering studies, but it has not altered his confidence coming into this year’s shootout.

“Last year was my first time in the Cup car and my first time at Sebring,” Couch said. “It was all a learning experience. I think I learned a lot and improved not only as a driver, but as a person as a whole since last year and I think I can use that to my advantage. I met all the judges last year and got along with them really well, so I think I’m in a solid position.”

Heather Hadley (Mooresville, North Carolina)
Heather Hadley’s background is like no other MX-5 Cup Shootout finalist; her racing experience is in Legends cars. Hadley initially thought that NASCAR was her future, but upon further research decided that MX-5 Cup was where she needed to be to break into sports car racing.

“I think something that helps me is that in the Legends cars we run a sequential transmission, which is what the MX-5 Cup cars run,” Hadley said. “I think that the Legends car is one of the most difficult to drive and I’ve been doing it the last five years, so I’ve developed strong areas, but I do have a lot to learn. I’m not nervous, but I know I’ll be disadvantaged in some areas and have an advantage in others.”

Part 2 of our introduction to this year’s MX-5 Cup Shootout finalists will follow later.